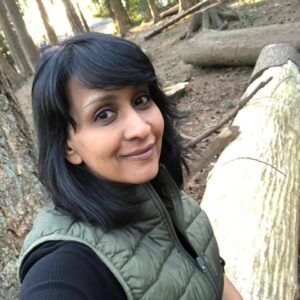 Anita Krishna, formerly a Director at Global News. Anita was born and raised in British Columbia and obtained her Bachelor of Applied Arts in Radio and Television from Ryerson University. For over 10 years now she has worked at Global directing thousands of newscasts in a variety of their programs including News Hour, Global News at 5, Global National, and most recently a series of Covid-19 press conferences. She started as an Assistant Director, 1997. Throughout her career, she’s worked as a reporter, show producer, AD and Director for Global TV, CTV, CKVU, Shaw TV, CKNW. In 2004, she produced a morning radio show in New Zealand on The Breeze and worked as a Journalist and Producer for Radio New Zealand.

Anita began to question her superiors at Global as to why the time honoured journalistic premises of truthfulness, accuracy, objectivity, impartiality, fairness, and public accountability were blatantly absent from their covid-19 coverage. Again and again her queries were met with the response “don’t ask questions just do your job”. This troubled her personal and professional integrity and she began to investigate the real science behind covid-19 and began to speak out against the official narrative.

Her defiance towards her superiors and unwillingness to continue to report lies and spread propaganda to the masses has ultimately resulted in her termination as of January 18, 2022.